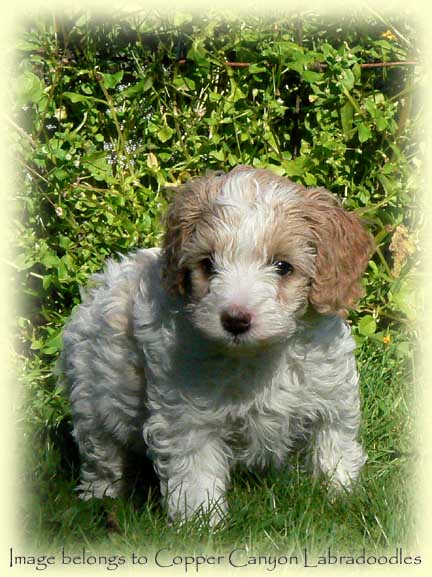 Miniature Australian Labradoodles make wonderful family pets and delightful companions. A cross between the sweet, gentle Labrador retriever and the intelligent poodle – as well as having a variety of other breeds in their background – Australian Labradoodles are the perfect animal for people of all ages, from the young children to older owners.

The temperament of the Australian Labradoodle is what makes it such a desirable pet. They are sweet and friendly dogs, without any aggressive tendencies. This makes them perfect playmates for families with young children.

Australian Labradoodles are also bred for excellent health. They have a sturdy frame and a non-shed coat, making them an excellent choice for those that have allergies. Their soft coat is easy to maintain, which makes them a great option for busy owners or those with disabilities that need a low maintenance pet.

Australian Labradoodles are a relatively new breed created in Australia with the intent to provide non shed, less allergenic dogs for use as service dogs for the blind, hearing impaired and other needs.  The steady, calm disposition of the Labrador Retriever coupled with the noted smarts of the Poodle, along with judicious small additions of other breeds, seemed to be the perfect combination for the creation of a new dog breed now known as the Australian Labradoodle.  Much work has also gone into selecting for a soft, loosely curled coat that does not demand as much grooming as the poodle coat often needs.  A true Australian Labradoodle coat should not require more than an occasional trim and weekly brushing, making them an easy care dog for those with disabilities.

The traits that make a perfect service dog are also the traits that are highly desirable for the perfect family pet…  A dog that is sensible, smart, loyal, calm, loves people and void of aggression in a non shed, allergy friendly, easy care “wrapping” describes the ideal qualities looked for in a family pet.  There is a huge demand for well bred Australian labradoodles and wait lists are common for reputable labradoodle breeders.  Good labradoodle breeders are working hard to ensure that health testing is done on the dogs used in the breeding program to try and prevent the health problems commonly found in many breeds today.  And when you are choosing a breeder, you should ask questions about what health testing has been done on their labradoodle breeding stock and what health guarantees they offer.

What Is An Australian Labradoodle?

Most breeds originated for use as hunters, herders, guard dogs or draft animals, and breed traits were selected for that purpose.  Australian labradoodles bear the distinction of being a breed created to be companions and helpers to people.  The Australian Labradoodle is a distinct breed in its’ own right, differing from straight poodle/lab crosses of various percentages.  This is due, in part, to generations of selection based on temperament and type, and to the infusion of other breeds that contributed to the characteristics now seen in the breed.  The true Australian Labradoodle has infusions in the background of their pedigrees of English and American Cocker Spaniel, Irish Water Spaniel, Curly Coated Retriever as well as the Poodle and Labrador Retreiver.

Australian Labradoodles are characterized first and foremost by temperament.  Labradoodles are to be a sweet, friendly, loving intelligent dog void of aggression.  The founder of the breed has said that they particularly focused on breeding for excellent temperament and health.  Only non dominant males and females were used in their labradoodle breeding program, regardless of what other attributes they may have possessed…  generations of this kind of selection has now consistently produced a sweet natured, friendly dog.  Labradoodles are a solid bodied dog, sturdy in type, with a non shed coat.  The Australian Labradoodle breed is now a recognizable breed in its own right with a breed standard of its’ own and will breed true to itself.  Here at Copper Canyon Labradoodles, we have chosen to begin our breeding program with multigenerational Australian Labradoodles direct from Tegan Park Breeding and Research Centre, one of the breed founders, and will continue to breed carefully, so as to maintain the high standards of this lovely breed.

Click here to go to the Australian Labradoodle breed standard.

Labradoodles: F1 ~ F1B ~ Multigens… How Is The Australian Labradoodle Different?

F1’s Since the very first crossings done in Australia in 1989 when the labradoodle breed was developed, there are a range of other types of labradoodles being bred to meet the demand for this popular new breed.  First generation labradoodle crosses (poodle x lab) are called F1 crosses and will have attributes of both the lab and poodle.  Many F1 labradoodles will shed to some degree (though generally less than a pure lab or other hair coated dog) and some will not.

F1B’s and F2’s  Other breeders are breeding a first generation labradoodle with a standard or miniature poodle (75% poodle 25% lab) and calling that cross an F1B.  F1B labradoodles do not tend to shed and can show more of the characteristics of the pure poodle in type.  Second generation labradoodle crosses (F1 x F1) will show more variation, both in body type and in coat type, with some of them showing a flat lab type coat,  a low to moderate shedding  coat and some a non shed poodle or ‘fleece’ coat and varying degrees of lab or poodle body type.

As a general statement, there is more variablity found in the earlier generations of labradoodles as type and temperament traits are not yet ‘set’.  By the third generation (F2 x F2), both body type and coat type will be more predictable, depending on the individual dogs selected in the breeding program.  It is not enough to only choose for coat type, the whole picture should be kept in mind.  It is a challenge to breed for temperament, coat AND type when developing this breed from ‘scratch’, not forgetting the health testing of parent stock along the way!

Also gaining recognition are other various ‘doodle’ breeds.  Shepadoodles, goldendoodles and aussiedoodles all have their loyal following.  The same discussion above regarding coat types and shedding applies to these other doodle breeds as well.

The first recorded purposeful breeding  of a lab to a poodle was done in 1988 by Wally Conran, who was working for the Royal Guide Dog Association.  A client’s husband had allergies to dogs…  over twenty poodles had saliva and hair samples taken and sent to where they resided, but her husband was allergic to all samples sent.  A while later, Wally suggested crossing one of the Labrador Retrievers with a Standard Poodle.  This was done and one of the resulting three puppies did NOT aggravate her husband’s allergies.  He was named Sultan and successfully competed his training as a service dog.

Although the lab x poodle program at the Royal Guide Dog Association was eventually abandoned, of the 31 puppies bred by the RGDA, 29 of them passed the qualifications to be service dogs, demonstrating the wonderful potential of the early labradoodle breedings.  It should also be mentioned that the sires and dams of these 29 labradoodle puppies were in the breeding program of the guide dog association because of their attributes of intelligence, trainability, willingness and loyalty.  Not just ANY poodle crossed with ANY lab produced these exceptional results!

After the RGDA abandoned the breeding program, likely because of the lack of consistency regarding non-shed coats and non-allergenic characteristics in the lower generations, Angela Cunningham, founder of Tegan Park Breeding and Research Centre, took up the challenge.  Purchasing dogs from the guide dog association as well as various crosses from another dog breeder named Don Evans, she began to build a breed type.  Other breeds were infused to achieve the vision of what she believed a labradoodle should be and then bred back into existing lines to create the Australian Labradoodle as we know it today.

Australian Labradoodles are not a breed that will suit every person!  Labradoodles are a smart breed and need stimulation, attention and some grooming.  They will not suit a family or person where they are kenneled for most of the day or left to their own devices in the house, as left to their own, they may find their own amusements!  Labradoodles are NOT a dog that you can leave tied or penned in the back yard. They are a very social breed, learn quickly and want to be with their people as a part of the family. They will need brushing once a week, a light trim every two or three months and baths occasionally.  A well bred labradoodle is a pleasure to have around, is remarkably healthy and has an average life span of 12 to 15 years or longer.  If you are looking for a family companion that is loving, smart, playful, non shedding and you have the time to train and love a dog, an Australian Labradoodle may be the dog for you!