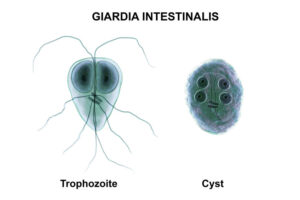 Giardiasis is an intestinal infection in humans and animals caused by a microscopic protozoan parasite, Giardia duodenalis. Giardia is a simple one-celled parasitic species; it is not a worm, bacteria, or virus. The Giardia organism has two forms. A fragile feeding form, known as the trophozoite, exists in the gut of infected animals, while a hardy cystic form is shed in feces and can survive several months in the environment, particularly in water and damp places.

Giardiasis can cause illness, especially diarrhea, in animals and people. However, it is easily treatable, and dogs can be treated for Giardia even if their test comes back negative as an extra precaution!

How Do Dogs Get Giardia?

Dogs become infected when they swallow Giardiathat may be present in water or other substances that have been soiled with feces. It’s easy for dogs to get when they drink from puddles or standing water, and geese or ducks are common spreaders of it through defecating in the water and on fields. Once the parasite is in your dog’s intestines, your dog can spread the parasite, even if he doesn’t show any signs of infection. If one of your pets is diagnosed with Giardia, talk to your vet about the precautions you need to take to protect your other pets.

Symptoms of Giardia in Dogs

Giardia in dogs does not always cause problems, but it is highly unpleasant when it does. The parasite inhibits your dog’s ability to absorb nutrients, water, and electrolytes properly. As pet owners, we need to be aware of giardia as a relatively common cause of diarrhea. The disease is particularly dangerous for puppies, senior dogs, and dogs with compromised immune systems. Failure to diagnose and treat the disease can lead to severe weight loss and even death in extreme cases.

It is important to note that dogs and other animals can have Giardia present in their intestines and be subclinical, which means they are asymptomatic. Since the test for Giardia is not routinely run in healthy dogs, veterinarians are not sure how often dogs contract this disease, so it is best to practice preventive methods.

The most important thing is making sure your dog has access to fresh, clean water in a bowl off the ground. If you live where Giardia is present in the tap water, purchase a filter that is proven to remove Giardia cysts from the water or boil your dog’s water. Boiling water will kill the cysts but remember to let it cool before giving it to your dog.

Be sure not to bring your pup to places where there are large amounts of dog feces, as this will limit the possibility of exposure. Boarding and training facilities that take the necessary steps to clean and disinfect runs and yards are less likely to have Giardia and other unwanted diseases.

If your dog has diarrhea, call your vet. Your vet will conduct several diagnostic tests to determine if your dog has Giardia, and depending on the severity of the case, they will discuss a treatment plan tailored to your dog’s needs.

At Copper Canyon Labradoodles, we take the precautions necessary to keep our dogs safe and healthy for their new families. We understand the dangers of diseases like Giardiasis and encourage pet owners to regularly take their animals to the vet and practise preventative methods to keep their furry friends healthy and safe.

To learn about our Australian Labradoodles, browse our website and check our expected litter’s page for regular updates!