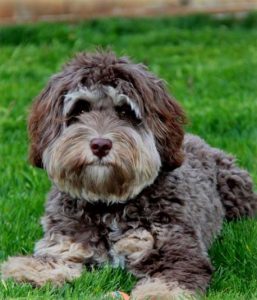 What if the genes from a Poodle and a Labrador Retriever mixed? You’d get the Australian Labradoodle!

If you’ve never seen one before, you might wonder what an Australian Labradoodle looks like, right? They’ve been described as having a teddy bear face coupled with big, round eyes and a fluffy coat. In other words, they are adorably cute! They can grow up to two feet and weigh up to 75 pounds or so, living about 13 to 15 years. For those with allergies, know that Australian Labradoodles are low shedding, low dander animals.

Are Australian Labradoodles low to moderate energy dogs? Yes. They’ll need a good half hour or hour of exercise daily. Many owners take their dogs with them on jogs and/or play fetch with them.

What about kids? Do they do well with kids? Yes. Australian Labradoodles are generally happy-go-lucky dogs known for their tenderness, loyalty and devotion. They learn quickly and may even do a few tricks. Thankfully, they’re not aggressive.

If you’re thinking of adopting an Australian Labradoodle for your family pet, please check this page, as well as this page. If you have any questions, please email dogs@coppercanyonlabradoodles.com or call 877-850-2022 and ask for Linda.

Note: Copper Canyon Labradoodles is located in Canada, specifically in British Columbia. We serve both Canadian and American customers. For Americans, know this: we’ve got an account with Bank of America so you can conveniently use American dollars/checks rather than having to deal with currency exchanges, money wires, etc.